In this article I’ll share my tips on how to write a bass line to a chord progression so you can tell your own story to the world with your bass.

Writing your own catchy bass line takes skill, finesse, and an ear for harmonics. However, the key to writing a great bass line is how you use chord progressions to tell your story.

Below, you will learn how to do this through the following sections:

Music theory involves a deep understanding of the nuts and bolts of how music comes together to create a song. Similarly, bass line theory is how the bass guitar plays into the song and relates to other instruments. One of the key parts, if you have not guessed already, is through the bass line.

A bass line is the foundation of each song. Playing the lowest notes, it helps to establish the beat, rhythm, and path of a song. It emphasizes the root of each chord or chord tone. While there are different types of bass lines and ways to create them – the role remains relatively the same.

Is the Bass Line the Same as the Melody?

No. The bass line differs from a melody in two main ways. First, where a bass line is typically composed of the lowest notes, a melody typically utilizes higher pitches. Secondly, a bass emphasizes the root of a chord or chord tone, whereas the melody revolves around them.

In a melody, the harmony is used to support it. However, the bass line is what helps that harmony transition between chords and chord tones.

Before I explain chords, it's important to briefly touch on notes and scales.

Notes: Musical notes are the individual components on which music is based. While there are natural notes (C, D, E, F, G, A, B), there are also sharps, flats, double sharps and double flats.

Scales: Scales are a sequence of notes that are assembled in an order that creates a specific frequency or pitch. In other words, you scale is our melody. For example, if you were to performance a C major scale, you would play “C-D-E-F-G-A-B”. Scales can be major, minor, diminished, dominant or suspended. (To learn more about scales, visit my beginner’s guide for bass scales.)

A chord is a harmonic set of at least two, but often more, notes that are typically played at the same time. However, for a bass guitar player – this is not necessarily true.

First, a bass guitar chord is made up of three notes. These are the root, third and fifth notes on a scale. (Using the C major scale above, this would mean your C chord would be played using the notes: C-E-G.) However, unlike the traditional guitar or piano, a bass guitar does not play the notes of each chord simultaneously.

Because of the low-pitch associated with a bass, playing all of the notes together creates a muddy sound. To prevent these, the bass “outlines” each chord by playing each note in quick succession.

Chords that start with their lowest note as the root are the norm. However, when the lowest note is not the first one, the chord is said to be inverted. Chord inversions add another layer of depth to your musical abilities. Let’s go back to that C major chord, which is played C-E-G. For a first degree chord inversion, you would play E-G-C. A second degree inversion for the C major chord would then be G-C-E.

If you are interested in learning more about chords and why a bassist should learn them, take a look at my complete guide to bass guitar chords.

What is Chord Progression?

There are several different types of chord progressions. However, the most popular choice is the “I-V-vi-IV” progression. These roman numerals refer to the order of chords according to harmonic analysis.

In keeping with our previous C major examples, let us look at the harmonic analysis associated with this scale. 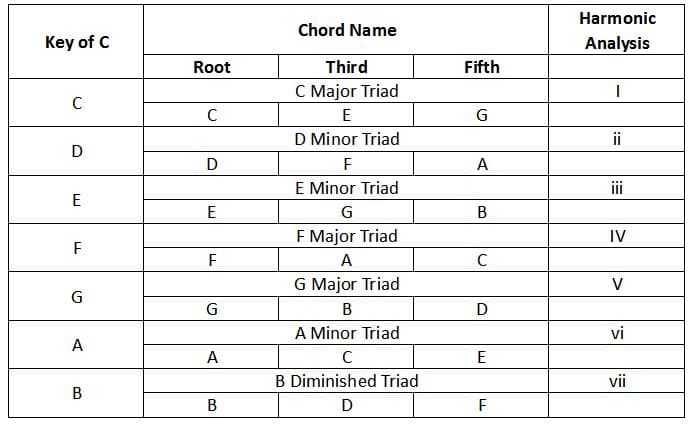 For an “I-V-vi-IV” progression of C major, you would play the chords associated with each roman numeral: C major, G major, A minor and F major triads.

If every instrument in a band were to play the C major chord, the bass would affect the overall sound. Why? As the lowest note in any arrangement, the bass is able to affect how any chorus of chords are presented. The trick with constructing bass lines is to understand and respect this power.

As a bassist, you do not want to simply drown out the accompanying instruments. Instead, you want to use your bass line influence to provide variations and progressions. Could you use single notes to establish your bass line? Certainly, however, these types of bass lines are one dimensional and basic. Because of this, chords and chord progressions become more valuable.

Let’s start with the popular “I-V-vi-IV” progression. As a quick recap, this progression indicates the following sequence of chords: C major, G major, A minor and F major. Knowing these chords (or taking a look at the table above), you can see the root note of each of these chords are: C, G, A, and F.

If you were to do a single note bass line – you would stop there. Quick and easy, right? If you want to create subtle variation, however, you could substitute one of those root chords with another note from their triad. For example, the G major chord is played G-B-D. To create a subtle change in the bass line, you could substitute B or D for your G note, giving you C-B-A- F.

Can I Change More than One Note?

Yes, you can replace other notes in your bass line with substitute notes from their respective chords. It is not limited to just a single swap. For example, if you would like to vary the A chord, you have the option of playing A, C or E. Perhaps opt for a new sequence of C-B-E-F.

What About Those Inversions?

Inversions add another level of variation. Let’s look at the A chord again. For a first degree A major inversion, you would have the chord sequence of: C-E-A. Using your inversion, you might opt for a bass line that goes C-B-C-F.

Is the “I-V-vi-IV” Progression the Only One?

Not at all. While it is the most popular, the “I-V-vi-IV” chord progression is not the only one.

Beyond the scope above, you can add embellishments to your bass line to make it more impressive. This may help to emphasis the intended beat of the song or create a temporary augmented sound that briefly wars against the melody. Some popular embellishments include repeated notes, octave play and walking the bass.

At the end of the day, the most important part of playing any instrument is that you enjoy it. Sure, learning new techniques may be frustrating. However, the more you practice – the easier it all will become. The same is true when it comes to studying notes, chords and scales as well as their harmonic analysis and progression structure.

Playing the bass guitar well has a lot to do with how well you understand ball line theory. After all, you fulfill a role no other instrument in the band can. The right bass line is waiting for you to find it.