Bass guitar chords can be a complete mystery if you don’t know how they are used. Here I’ll explain what they are, when to use them, and how to go about it.

Playing the bass guitar makes you an important member of any band. Lead guitars typically play high notes, and rhythm guitars often cover the mid-range notes. Bass guitars round out this sound, playing ​the low-end.

Along with the drums, your bass guitar helps build the rhythmic foundation for any song. (Hence the term “the bass line”!)

Chords are nothing new to many musicians. Pianists and guitarists often use chords in their compositions. However, chords can also help a bass guitar truly stand out.

If you want to truly stand out from the average bass player, learning your chords is the way to go. To help you do so, this guide will cover:

Ready to learn more about playing chords on a bass guitar like a rock star? Let’s go!

What is a Chord?

In music, a chord refers to any harmonic set of two or more notes that are played simultaneously. For a bass guitar player​, a chord typically includes three notes.

To understand chords, it's important to first understand music notes. (Check out my ​recommendations for great bass guitar books to find great sources that will help you learn to read music, play bass, and more.)

Scales are a sequence of notes that, when strung together, create a melody. Using those natural notes, for example, a C major scale would be played C-D-E-F-G-A-B. The C major chord, then, would be composed of the first (or root), third and fifth notes of the C major scale. In this case it would be C-E-G. (For more information on scales, check out my complete guide to Bass Scales for Beginners.)

As with scales, chords can be major, minor, diminished, suspended, or dominant. To add to the complexities, there are basic chords and seventh chords. Basic chords are usually 3 notes together, also known as a triad.

​For all the examples below we will be basing them on the C major scale which is C-D-E-F-G-A-B. The major and minor chords listed below are all you really need to know to get started, so don't stress over trying to learn everything at once.

​Contemporary music also tends to utilize a seventh chord or tetrad. Tetrads have one note beyond that of the basic chord and are a bit more complex. (While tetrads are great, let us focus on mastering the basics first.) 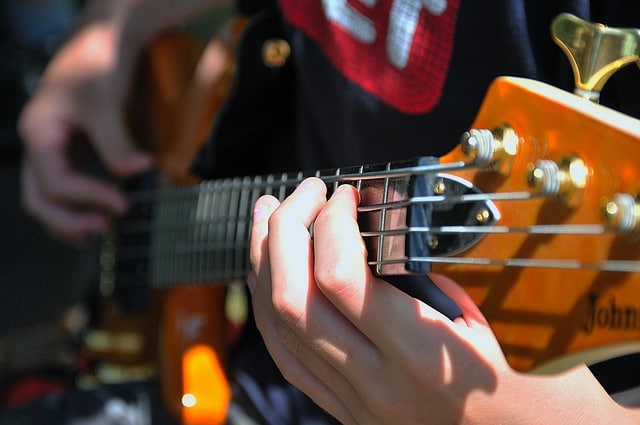 Scales vs Chords: Is There a Difference?

Have I confused you? Scales and chords may sound confusing. After all, both scales and chords refer to specific groupings of notes. Nevertheless, there are some differences that should be noted.

Chords are traditionally played at the same time, involving three to four different notes. (As bassists, we play these differently. More on that later!)

Scales, on the other hand, are groupings of seven notes. Unlike chords, the notes used in a scale are each played individually. While scales are larger in scope and contain more notes, chords are often associated with individual pieces of a scale.

In other words, if a song is a musical story, each of the musical notes provide you with the individual words. Scales and chords, then, create the sentences and paragraphs from these notes that convey the story you are trying to tell.

Like the complex nature of a story, chords and scales are built differently, giving you various lengths of sentences to flush out your tale.

How Do Bassists Use Chords?

Bassists do not always learn to play chords. In fact, many do​n't feel that they are necessary. For a regular bassist, this might be true. However, for a star, like Flea from the Red Hot Chili Peppers or Suzie Quatro, learning to play chords on their bass guitars has made them truly stand out from the crowd.

If a bassist does choose to learn to play chords, it helps to enhance their playing. This is particularly true for those rare bassists who play solos. However, this is not the only time bass chords are important.

I already mentioned that a bass guitar helps to round out the sound of a band. In fact, that is the bassist’s primary job in a band– to support and enhance the sound produced by the other instruments. There are a few reasons for this.

Understanding chords and being able to play them helps to enhance your own musical knowledge. Because learning chords increases your harmonic abilities, it can help you to pick up on the best way to enhance the sound around you. For example, if one bandmate yells out “C chord!” the collective chords that come from each instrument, including the bass, creates a full spectrum of complimentary sounds.

For a star, understanding chords is the best way to build a bass line. All other notes and scales only help to emphasize and compliment these chords. From being able to play along with hits to maintaining the bass line for other instruments, learning how to play chords gives you a new set of skills that can help you to be more than just a background player.

The Best Way to Voice Chords on Bass

Chords, when played together, can often sound “muddied” on a bass guitar. To prevent this from happening, bassists must play chords differently than other musicians.

Instead of playing the notes of a chord together, as on a traditional guitar, a bassist tends to outline the notes instead. (This style of playing a chord is called “arpeggio”.) In other words, as a bassist, you must be more creative and interesting in your approach to playing chords.​

That may sound a bit confusing, so let me put it another way.

What does this mean to you as a bassist? It means that a bassist best voices a chord through the use of “chord tones” and “chord patterns” instead of as a group of notes together.

Can you play a chord on a bass as you would on a traditional guitar? You certainly could. However, because all of these notes are typically on the low end, the chord will not sound clearly defined when all notes are played together on a bass guitar. By playing the chord tones, you are better able to define each note in your chord pattern.​

​Do you always have to play individual notes on bass? No, you can play the notes of the chord all together like a guitarist would, but just be careful of having it sound too muddy.

Very low notes tend to clash with one-another because of the low frequencies, so make sure to spread the notes out and choose some higher frequency octaves of some notes, or just play the chord higher up on the neck.

Moveable chords refer to chords that are easily slid up and down the next of a guitar. On a bass guitar, they are used to play similar chords that include different root notes. For example, the A major chord uses the same finger position as the C major chord, but elsewhere on the neck of the bass.

Moveable chords, like other chords, can be played together. However, as with open chords, they sound best when the notes are played separately on a bass guitar. As with learning any new instrument or style of play, it takes practice to master open and moveable chords alike.

What is a Chord Inversion?

Learning chord inversions can give you more sequences with which to support and enhance your bandmates.

When you play a chord, the root position is usually the lowest note in your grouping. However, when the root is not the lowest pitch, the chord is said to be inverted.

As with moveable chords, chord inversions give you yet another layer of expression you can use to help enrich your playing and accompaniment. It also makes it easier to play chords wherever you happen to be on the neck rather than jumping far up the neck to play starting on the root note.

What is a Chord Progression?

A chord progression, also known as harmonic progression, occurs when chords are played in succession. As each chord is played, it creates a sequence of sound that provides the foundation used in many popular songs today.

Chord progressions, which includes chords and chord inversions, creates your bass line. This may sound simple enough but there are some rules to chord progression.

Progressions stick with a particular scale.

Uppercase roman numerals indicate major chords, while lowercase refers to minor or diminished chords. In all cases, the same system of harmonic analysis is applied to your chords.

Knowing your progressions helps your music tell the story. The “I-V-vi-IV” progression itself shows up in several famous songs, including Let It Be (The Beatles), With or Without You (U2), When I Come Around (Green Day) and No Woman, No Cry (Bob Marley).

It is important to establish a base for your progression before sequencing through.

How you use progressions is up to you, however, treat progressions like a journey themselves. Start with a home, journey away, but always return home. This helps piece together a complete and cohesive sequence of sounds and tones.

What is a Chord Chart?

Music can be transcribed in several ways. Two of the most commonly used are lead sheets and chord charts. (Tablature, or tabs for short, are also a popular choice. Check out my guide on ​reading tabs for more information.)

Using music notes, these musical outlines are able to provide a more detailed picture of the sound you should produce. (Can you use a lead sheet like a chord chart? Yes. Because a lead sheet includes the chord symbols, you can simply pull the chords from these pieces. However, you must know how to read music in order to fully appreciate the value of a lead sheet.)

Chord charts, on the other hand, tend to provide the lyrics and chord symbols to be played only. In a chord chart, melody is not conveyed. Because of this, it is important for a bassist to be familiar with the song before using a chord chart to play along with it.

How Do You Read a Chord Chart?

Chord charts tend to include one of two methods for conveying notes to a bassist. These are chords in standard notation or chord symbols.

Chords in standard notation appear more like your typical music sheet. It will stack the three notes of a chord together on the bars of a musical bar.

Chord symbols, by comparison, are a bit different. There are two main components to any chord symbol. The first is the chord’s root note, which defines how the chord is built. The second component is the quality of the note. This indicates the type of chord, such as major, minor, or diminished. This means, you may see a C, F#maj, or Am7 that is meant to convey the chord. ​

Chord charts may also include slashes, a sudden lack of symbols, or N.C.