When it comes to electric upright bass vs acoustic, there are so many similarities and differences that it can be hard deciding what to get. In this article we’ll take an in-depth look into double bass and EUB to help you decide which is right for you.

​When it comes to Electric Upright Bass vs Acoustic Bass, there are many benefits to each depending on what you want to get out of it.

First I'll explain what each one is, and then I'll go in-depth into the benefits of each one so you can choose what's right for you.

​What Is An Acoustic Upright Bass?

An acoustic upright bass, also known as a double bass, is the largest and lowest-pitched string instrument in the modern symphony orchestra. It’s the only modern bow-stringed instrument tuned in fourths, with the tuning set at E, A, D, and G.

Other than being a member of the string section of the orchestra and concert band, the upright bass is also featured in jazz, rock, folk, blues, and many other styles of music.

The double bass is played with a bow (arco) or by plucking the strings (pizzicato).

It stands at about 6 feet tall, and comes in multiple size variations. The “standard” size for most adults is going to be ¾ size, however you can also get ½ and ¼ size for children, or a full 4/4 size for a larger adult. Keep in mind that ½ does not mean it’s half the size of a full-sized upright bass - It is just slightly smaller.

It’s construction usually consists of multiple types of wood including maple for the back, spruce for the top, and ebony for the fingerboard.

There are 2 typical designs of double bass when it comes to the outline shape - violin form and viol da gamba form. The bridge has an arc-like curved shape which allows for each individual string to be played with a bow. 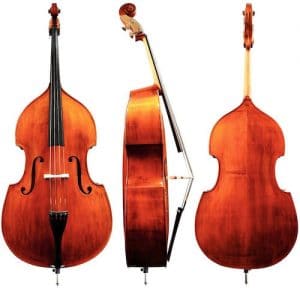 The double bass features very similar parts to members of the violin family, including a wooden, carved bridge to support the strings, two f-holes, a tailpiece into which the ball ends of the strings are inserted, an ornamental scroll near the pegbox, a nut with grooves for each string at the junction of the fingerboard and the pegbox and a sturdy, thick sound post, which transmits the vibrations from the top of the instrument to the hollow body and supports the pressure of the string tension.

When it comes to playing with a bow, heavy playing (fortissimo) on the lower notes produce a dark, menacing effect, while lighter playing (pianissimo) can lead to a mellow accompaniment line.

In jazz, rock, and other related genres of music plucking the strings (pizzicato) is usually the main focus. Bassists also tend to add semi-percussive ghost notes to go along with their playing which helps add a sense of rhythm to the bassline.

What Is An Electric Upright Bass?

An electric upright bass, commonly abbreviated as EUB, is an amplified version of a traditional double bass along with a solid body and slimmed down profile. This minimal body dramatically cuts down on the size and weight, but the features are still similar enough where a traditional bass player would have no problems playing on one.

EUB’s are connected to an amplifier and speaker cabinet for performances.

The first electric upright bass was developed in the mid 1930’s, although at the time amplifiers could not replicate the deep bass tones of it’s acoustic counterpart. Because of this there was little interest in EUB’s until amplification technology came up to speed.

Today, EUB’s are becoming more widely used every year due to the ease of transportation compared to the acoustic upright bass.

There are essentially 2 types of EUB’s - solid-body and hollowbody. Solid-body construction leaves no hollow enclosure, therefore allowing for no acoustic sound to be produced. Hollowbody on the other hand has a small hollow enclosure in the body (although still smaller than an acoustic upright bass), which produces a slight acoustic sound. It’s just enough for personal practice, but during performances it still needs to be hooked up to an amplifier.

EUB’s come in many shapes and sizes. Some are very small and skinny, while others more closely resemble their acoustic alternatives. They come with long end-pins in order to accommodate the players height, and most EUB’s also come with built-in pickups and volume controls just like electric guitars. 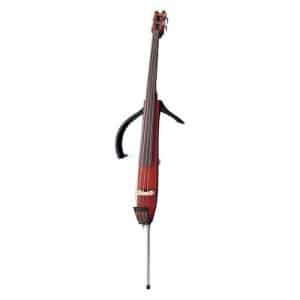 Like the traditional acoustic upright, EUB’s come with 4 strings, although they can also be found in 5, 6, 7, and 8 string varieties for extra range.

The scale length can vary between guitars. Some are around 42” which is similar to that of an acoustic, while other scales are 30” which can make it easier for a bass guitarist to transfer to one. Most EUB’s are fretless, although you can find ones with frets which again will help an electric bass guitarist with their transition.

There will often be a raised reference point about 1/3 down from the nut to the bridge at either the "D" or "Eb" position to represent the 'neck heel' of the acoustic bass. Many EUBs have wooden or metal bars to brace the instrument against the musician's body, to act as the upper bouts of a wooden double bass. The wooden or metal brace bars help the EUB to rest against the player's body in a position roughly similar to the way a double bass rests against the body.

Many EUB’s used to use magnetic pickups, similar to those found in electric guitars. Recently, however, modern EUB’s have started using piezoelectric pickups located in the bridge. The signal is preamplified and equalized with a preamp, and then sent to either a PA system or bass amp.

Benefits Of An Acoustic Upright Bass

A traditional upright bass can be the more scenic option of the 2, and it will usually produce a nicer, more organic sound. There is just something about the beauty and stage presence of an acoustic bass that a “walking stick” style EUB can’t compete with.

Another benefit of double bass is that you don’t need to worry about things like speakers or feedback issues. You can play it anytime, anywhere. While it’s true that EUB’s are more lightweight and mobile, you still need to think about if you are going to be transporting an amplifier or not. Not only does this add to the weight, but the cost as well.

Benefits Of An Electric Upright Bass

The most obvious benefit of an EUB is the smaller size and weight. When it comes to transporting a double bass it can be a huge pain, but with an EUB you can fit it almost anywhere - especially if you decide to go with one of the slimmer versions available.

The convenience for mobility, storage space, and volume/tone control are enough reason for lots of modern bass players to make the switch.

With the ability to be amplified, EUB’s can open up a whole world of musical styles. Imagine playing with a heavy metal band using a double bass. You probably won’t be heard at all! Being able to just hook right into the PA system or amp means you can now hang in there with the drummers and guitarists who previously drowned you out.

While EUB’s have their own unique tone due to being amplified, the amps themselves can also flavor the tone and projection to your exact liking which is a huge benefit.

Sure you CAN amplify a traditional upright bass, but getting a great sounding amplified tone out of one is a rare thing indeed, and you’ll always have the acoustic tone there in the background.

Silent practice is also a possibility with a solid-body EUB since you can just plug headphones straight in.

Deciding which to get really comes down to your specific situation. Treat them as 2 separate instruments entirely. Comparing them is like trying to compare a classical acoustic guitar to a solid body electric guitar. They each have their own purposes and advantages for different styles of music.

If you are going to be traveling a lot or playing modern styles of music like jazz, rock, fusion, or world, I think an electric upright bass would be a great investment due to its versatility. If you are going to be playing mainly classical music in an orchestra or with a string ensemble then I think that a double bass would be the best way to go due to the traditional look, feel, and organic sound.

If you decide to go down the acoustic upright bass path, I can highly recommend the Cecilio CDB-100 3/4 Upright Double Bass. It has a very warm sound, and for the price it’s perfect for those just getting started learning upright bass.

If you decide you want an electric upright bass, my suggestion would be the Barcelona 3/4-Size Electric Double Bass. It’s made of solid maple and supports connections for headphones as well as mp3 players. It’s an inexpensive way to bring an upright along with you anywhere and it sounds fantastic.

One reason to NOT get an EUB is to use it as a transition tool from electric bass guitar to double bass. The way you play EUB vs. double bass is going to differ slightly because of the amplification and pickups. You’ll learn to play to the advantages of the pickup, whereas when you switch to acoustic you’ll have to re-adjust your playing style slightly. It’s better to pick which one is better for your current situation and stick with it if you can.

If you decide to go with an electric upright bass there are a few things to keep in mind. Hollowbody EUB’s can have a more resonant tone than solid-body, however they are more prone to feedback, so solid-body is a better choice for louder styles of music like rock and metal.

Also, some varieties of EUB’s cannot be played with a bow due to their flat neck. These are specifically designed for pizzicato style. If you want to play with a bow, make sure it has a curved neck.